Motorcycling In The Mountains

The last three days in Chiang Mai we spent crusing around on scooters, it was without doubt one of the major highlights of my time so far. It was so easy to get hold of them, we just rocked up to one of the many places renting them and cut a deal paying just 150 baht (£3) a day. We were given 110cc automatics and what blew my mind was the extremely minimal paperwork required to drive these things away. Between seven of us they required just two passports, we were never asked if we had a license or indeed whether we had even ridden before, they didnt even take our names and asked for no deposit, it was maddness. 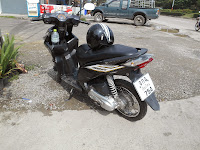 The traffic in Chiang Mai city was pretty crazy though not as hecktick as I thought it might have been. We quickly learnt the rules of the road are pretty much non existent here. A red light is generally optional to stop, the one way system can infact be two way and if you want to drive on the wrong side of the road past a police car (as a couple of us did by accident) well thats just fine too. It was an amazing rush weaving through the traffic, the bikes were incredibly easy to ride and had plenty of gumph in them to pull out of any sketchy situations.

The real fun came when we got out of the city and onto the quiet open roads. The first couple of days when we went exploring we came accross a temple on top of a hill, it was decorated inside with beautiful spiritual paintings with a spectacular view of Chiang Mai down below. On another adventure we came across some hot springs and boiled and ate some bird eggs (quail I think). 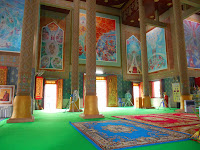 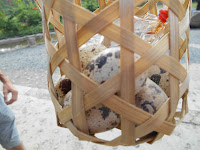 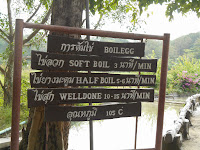 The last day we went out topped them all, it all started off with a mission to find the waterfall we had heard about. Upon finding it we climbed the rocky stairs for a what seemed an eternity until we reached the final fall at level 10. In this spot it was safe enough to get in, it was the perfect way to cool down as we were exhausted and extremely hot by this point. After the falls visit we decided to take the long scenic route back all through the mountains. It was the most exilerating ride of my life, we got so high up we were nearly on par with the clouds.  The roads for the majority of it were fantastic, very  smooth and very windy, it was like something out of Top Gear. Half way through we reached a viewing point where all that could be seen was a large lushous green landscape; it was amazing. 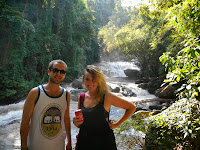 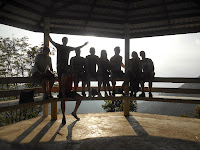 I am currently now in Pai, a small town further north close to the Burmese border. We have a huge group of nearly 20 of us now as we met so many in Chiang Mai. In the next few days I have to leave them all though as I am heading back down south to Ayyuthaya. The office I visited there earlier have contacted me and want me to work at thier three day English Camp which sounds like fun. It doesnt pay much but its a great way to get my foot in the door and gain some experience. They run them every week so I think I may settle in Ayyuthaya and work for this company for a while but ill know more after I work the first one.

Im perched right now in a hammock outside my bungalow. We are at "Darling Viewpoint Resort" which has an incredible view of the mountains right from our balcony. The woman running it is a crazy thai hippy, it's very chilled out here. There a nice little pool too so it feels just like im on holiday yet im paying pittance. I love this country!
Posted by Chris Martin at 21:57