Trekking in Chiang Mai washed down with Muay Thai

After having a blast in Sukothai we ventured off to the bus station to take the (supposedly) five hour bus ride to Chiang Mai. We paid for 2nd class tickets at least expecting a seat however this wasnt the case, what we ended up with was essentially a shelf at the back of the bus to fit all seven of us on. There was one mattress on half the side the rest highly uncomfortable steel, what made matters worse was the air conditioning was constantly dripping making the whole place wet. It was an interesting painful ride that actually lasted seven hours instead of the advertised five, but hey, this is Thailand.

Upon arrival we headed to JJ guesthouse, the lady here was trying to sell us some tours that they do and offered a discount for our group, we decided on the one day trek consisting of a visit to: an orchid and butterfly garden, elephant riding, white water rafting, a visit to the long neck tribe village and a walk to a waterfall. The day was incredible, I have never done anything like it. Riding the elephants was fantastic, half way through I moved from the chair and rode right at the front of it desperatly keeping my balance. The long neck tribe village was bizzare, I'd seen it on telly before and really dont understand it, I guess its their tradition but im not entirely sure how ethical it is for them to have tourists walking through every single day, truth be told it was like visiting a human zoo. The white water rafting was incredible, a proper rush in some of the wilder rapids. On one of the calmer straight paths we jumped out and let the river carry us for a bit I narrowly avoided some serious damage to my feet and legs on rocks but it was awesome. After some freshly prepared pad thai for lunch (the best ive had so far in Thailand) we had a little trek to the waterfall, this spot was so good, our tour guide told us we could slide down it from the top and it would be safe, I was cautious at first but after he showed us himself I did it; over and over again. It was so refreshing as the water was freezing. That then concluded the trek and we headed back to the guesthouse. 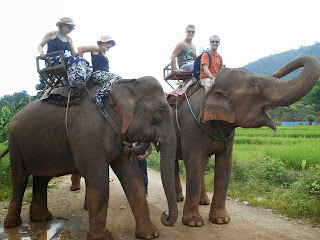 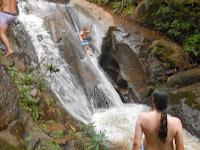 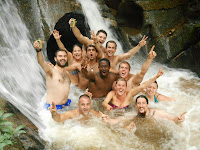 In Chiang Mai they have Muay Thai fights every night. The lady at our guesthouse said she could get us tickets at a discounted price so we took 16, this was all of our group plus the others we had met on our trek. The seats we got were excellent, she must have a hook up there as less than half hour in, me and a few others were upgraded to VIP ringside for free. It was a brilliant night and we placed some small bets between us to spice it up further. Later came the final big fight of the night, New Zealand VS Thailand. It was a tough call on who would win and it ended with the Kiwi winning. When it was over we all headed to a bar that turned out to be the same place all the fighters were drinking too, I went over and got a picture with Richie, the champion of the night. 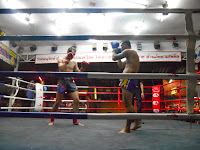 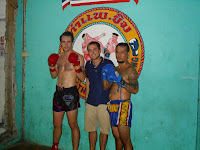 Our plan is to stay in Chiang Mai for a few more days. As my group only have two more stops before they want to go to Laos I may stay here and try to settle for a while but im still undecided. One of our friends Chooks is leaving to go back to London and tonight is his last night so were going for a nice meal somewhere.

Ive just come back from an amazing massage from a place that is literally next door to our guesthouse, it cost me £2! Tomorrow I think we are renting some scooters and going exploring.