Getting to Sukothai was a breeze, a short bus of just an hour. When we arrived we were greeted by a couple of tuk tuk drivers offering us a ride to the "4T Guesthouse" it was bungalow accommodation with a pool, it looked pretty sweet and was a good price so we decided to take them up on it. As soon as we put our bags down we dived straight into the pool, it was a beautiful relief from the hot Thai sun.  In the evening we checked out a few of the local bars and by the end of night we had become a group of around 25 with people from all over the world. We invited them all back to the guesthouse for a pool party and it turned into an seriously good night, we partied long into the early hours. In the morning, while all the others were still in bed nursing hangovers, I headed back to the pool. I ended up  being in there for four hours playing frissbee with Jan, a German kid here with his parents. 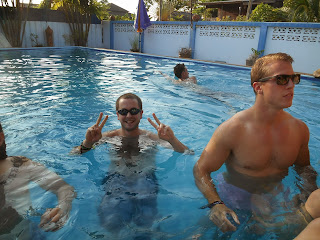 Once the others surfaced we decided to head to the old city and hire bikes. The guesthouse staff said though that there wouldnt be time to get round it all on bikes. As an alternative they suggested taking a couple tuk tuks and thier driver's would take us all around on a tour, after some discussion on price we whittled it down a bit and set off. The day was spot on! The drivers were so funny and very knowledgeable, the tour was supposed to be three hours but ended up being over four, we had such a good day that we treated them to dinner, we gained a lot of knowledge through these guys, of Thailand, and the orginal capital city Sukothai. 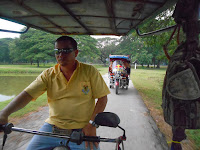 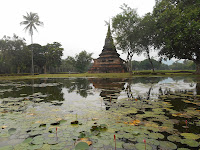 On the way back to the guesthouse we drove past a car crash scene with police everywhere, we slowed to have a look and at the last moment I spotted Jan and his parents; it was them involved in the crash. We got out the tuk tuk to check they were ok, luckily nobody was hurt but the car had done a 360 in road. Jan was very upset and shaken up and his dad was having a nightmare trying to talk to the police. His English is bad and even if it were good Thai police generally dont speak English so there was no way they would have got this sorted. Our driver Dom saved the day by speaking to the police, our Dutch friend Steven also speaks some German so going three ways the information got through. They had to go to the police station to confirm insurance details, they had insurance so it looked like it would all be fine. Dom told us they could be at the station some time so Jans dad asked me if I would look after him and take him back to the guesthouse. I talked to him all night via a translator app on my tab, he told me he is an inline speed skater and competes nationally, when he is 18 he hopes to make the commonwealth games, he was a cool kid. Three hours later his parents returned and everything was sorted, they would have a new car delivered the next day. 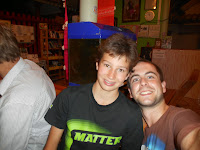 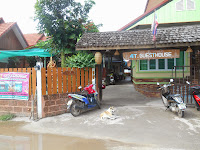 Our guesthouse, the staff and its tuk tuk drivers made our experience in Sukothai. If I find myself there again I shall certainly return to the 4T Guesthouse. Our next stop; Chiang Mai